5:30am wake up announcements, breakfast at 6am. The friends at my table were so funny and we were laughing so hard for so early in the morning! A great way to start race day.

We loaded our bags with running shoes, extra gloves, dry clothes to put on after the race, cameras, food, three water bottles, and whatever else we wanted on shore during the race. The temperature was not too bad but it was cold enough that my camera battery wouldn't work unless I warmed it in my hand first, so I opted to not carry my camera during the race.

The race started at Belingshausen Station, a research area on King George Island- there were 4 research facilities-Russia, China, Chile, and Uruguay. There was also an airport which is one reason the race is held there- if anyone gets badly hurt they can be airlifted out. We were all required to have $100,000 medical evacuation insurance, but fortunately nobody needed to use it that day!

Changing into our running gear, we put our water bottles in a row on the ground near the start banner and used the very primitive bathroom- a tarp slung over a rope tied between two rusted out boats, and buckets for toilets. 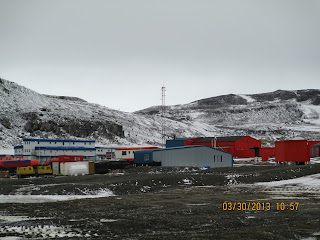 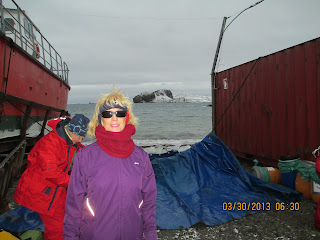 before the race started- the blue tarp in the back is the bathroom, but it did get pulled higher before they put the buckets under it!
Posted by Antarctic Turtlerunner at 8:44 AM